Skip to content
Posted on October 19, 2018 by ephraim russell

Olivia Jia’s essay on Leroy Johnson’s Dogs/Walls/Dark Energy is the first in a series of essays archiving one year of Grizzly Grizzly exhibitions, in celebration of our 10th year as an artist collective. Throughout the year, we will be collaborating with exhibiting artists and emerging and established writers to produce essays that critically reflect on the exhibitions and expand the ideas explored in our experimental project space. In addition to being posted on this blog, the collected essays will culminate in our first bound publication, to be released in September 2019. Support for this year-long project, that fosters writing in the visual arts, was generously provided by The Velocity Fund administered by Temple Contemporary with generous funding from The Andy Warhol Foundation for the Visual Arts.

If you don’t have a forge, melt zinc in your oven. If you need clay, dig it up. Sift through it in your palm to feel what this street corner is really made of: note its nuances in roots and grainy gravel. This place isn’t ubiquitous. The clay has its own nature that a potter must contend with—and learn to love.

According to Leroy Johnson (b. 1937), the knowledge of how to work with this mysterious, unprocessed earth is the real skill of indigenous potters, long forgotten by most contemporary ceramicists who rely on smooth, pre-mixed clay. For years, Johnson made pipes from clays excavated throughout Philadelphia, tapping into that long lineage of potters who molded things from the very ground on which they lived. These humble objects embody some of that specificity of place—Johnson’s relationship to this city, his home, is now concrete. It’s articulated through touch.

These clay pipes are the most potent gesture of his ability to reveal meaning in things often overlooked. Yet this same ethos can be found in all of his artworks, no matter how far-ranging in appearance: Johnson is a shape-shifter and an alchemist, and for him, no material seems unmalleable. At his Callowhill studio, he hops from painting to sculpture with a deftness borne of voracious reading and intense practice.

The do-it-yourself nature of Johnson’s work is not an aesthetic—it’s necessity. As a black artist without a formal art education, Johnson is a self-described outsider. He has occupied a position alone, away from the various art communities of this city for most of his life. The seven decades of this artist’s work have never been weighed down by the desire for a niche; he chases his curiosity wherever it may lead. Only in the last couple of decades have local institutions given Johnson his due. Yet this position apart has allowed Johnson to survey his world clearly. Injustices are blatantly visible, and this landscape is inundated with politics.

I first learned of Leroy Johnson’s work earlier this year, during an exhibition at Marginal Utility of Johnson and Sarah McEneaney’s daily protest drawings. Each of the hundreds of drawings was a parodic reaction to the circus-like hirings and firings of the Trump administration. Though not all of his work is so explicitly political, Johnson is always clear and earnest in his intentions—there’s no tired irony or apathy here. In the corner of his studio, there’s a sculpture of a figure holding a cardboard gun, stuffed with plastic bags. The stained cloth of its bodice bursts at the seams, and it’s a thing of dire shambles—a sharp castigation of American gun violence. Then, there’s the stack of watercolor paintings—birds and babbling streams, observed with such quiet care. There are panoramic cityscapes, and little models of houses made of cardboard, all created with dense layers of painting and collage. They are incredible microcosms. In every artwork, he understands the city to be a stage for all manner of human experience.

The function served by native Philadelphian clay in his ceramics is, in other works, filled by photographs or things found on the sidewalk. Johnson’s work is often formed through accretions of objects and scenes that usually go unnoticed or unremarked. He brings together the stuff of the lived urban environment, actively sifting through his field of vision for the quiet dramas of the landscape. Even in the throes of abstraction, Johnson’s colorful, geometric city blocks are built with fragments of these photographs; the architecture of his paintings is firmly rooted in textures of the real. This is the earnest stuff a person can’t make up: in a little sculpture of a city block, he reproduces words found scrawled on a wall: “1 CROSS + 3 NAILS = 4 GIVEN.” Johnson’s city is a palimpsest of our actions and desires, a record of that which we learn to unsee by convention. We’re unconsciously editing out things that are incompatible with our preconceptions. Perhaps we censor our own vision even more egregiously in cities, where the sheer saturation of visual material can be overwhelming. These works are fervent affirmations of that world. At the heart of Johnson’s practice is a utopian notion that we all ought to believe; the stuff that makes life so rich and exciting is all around us, in the dirt, on the street, and in good books.

The rich and varied breadth of Johnson’s artistic practice is important context for his latest exhibition, which leans heavily into metaphor. The city remains the setting in Dogs/Walls/Dark Energy. Here, dogs are presented as personified metaphors and mirrors for human nature. The accompanying artist statement lists possible references and inspirations, ranging from Snoop Dog to Cerberus; the dog he draws is both mythically powerful and utterly relevant. In shattered geometric landscapes, the dog holds court. Other works are more atmospheric, the slip of a shadow. The occasional mark of white pastel casts a ghostly pallor.

Most of the works are drawings made with charcoal, but there is one large painting in the room. Titled The Unbearable Lightness of Being, it is the earliest piece, and a bridge to the rest of the exhibit. Three faceless figures live in this haunting dreamscape of a city. Before them is a large dog, the only being to stare out at the viewer. Surrounded by a confetti of photographic fragments, these anonymous figures seem to fade, pressed into the geometric space around them. They are without identity, perhaps alien even to themselves; in this painting, the dog is the one with agency.

These drawings are a fascinating development in Johnson’s practice, because they drop those pieces of the real world in favor of a fantastical one. It just may be that our real and political climates are so challenging and so absurd, that photographs can no longer capture the existential dread of our society. So drawing can suffice where photography fails, because drawing re-centers that subjective hand which can feel this anxiety. Johnson’s black marks are scrawling, vociferous, vibrating; there is tension in these lines, shapes that loom, lurk, leap and leer. They beg to be described through onomatopoeia. They feel alive, but alone. We are mired in strange times, and these drawings are their reflection. Their world—and ours—feels on the verge of breaking, but into what? We are the dog, that lonesome beast, yet it is also the specter that hounds us. 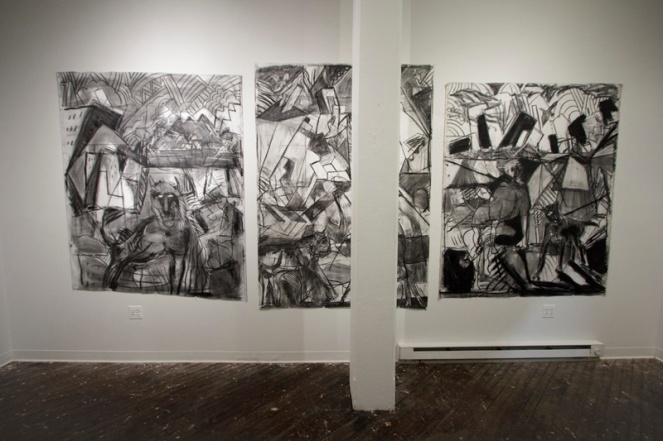 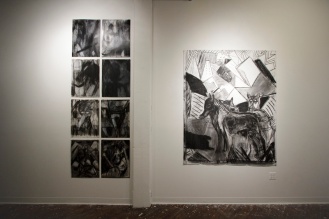 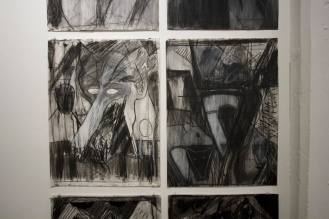 Olivia Jia is a Philadelphia-based painter and arts writer. She received a BFA from the University of the Arts in 2017. Honors include the Ellen Battell Stoeckel Fellowship to attend the Yale Norfolk Summer School of Art in 2015 and the President’s Award for the Highest GPA in the College of Art, Media & Design at UArts. She has exhibited at venues including Dongsomun in Seoul, Marginal Utility, New Boone, the UArts President’s Office Gallery and Space 1026. Jia currently writes for Hyperallergic, Title Magazine and Artblog.

Leroy Johnson (b. 1937) is a mixed-media artist whose work takes the form of painting, collage, and assemblage sculpture. A native of Philadelphia, his work is poetic and reflective of his many experiences in the inner city. Johnson has exhibited widely, with past solo shows at Philadelphia’s Magic Gardens, Tirza Yalon Kolton Ceramic Gallery (Tel Aviv), Gloucester County College (Sewell, NJ), and the Camden County Historical Society. He has received grants from the Mid-Atlantic Arts Foundation, the Independence Foundation, and the Pennsylvania Council on the Arts. Johnson received a Masters of Human Services from Lincoln University (1986-88), and was a 2014 Pew Fellow at the Pew Center for Arts and Heritage. He was recently chosen as The Directors Highlight in the 2018 Let’s Connect Philly Competition at the Barnes Museum. He has been a participating/resident artist for several community-based arts projects including Ile Ife, The Village of Arts and Humanities, and Taller Puertorriqueno in Philadelphia, PA; and The Church of the Advocate, St. Francis Academy in Baltimore, MD. Most recently, he was selected for the Woodmere Annual: 77th Juried Exhibition at the Woodmere Art Museum, Philadelphia, PA; in spring 2018 was included in the two-person exhibition “#WE HAVE NO PRESIDENT” (with Sarah McEneaney) at Marginal Utility, Philadelphia, PA; and in 2017 was the inaugural resident artist at the Art Barn in Amaranth, Amaranth, PA.